Mark takes on commissions for Architects, Agencies or other individuals and contracts to the film industry. From conception, through design and draughting, CNC drawings for cutting (and bending), and finally assembly of the finished work; Mark has vast experience in a wide range of projects. He is an original, with an inventive and creative mind and is normally involved in a project from conception to finished product. He is based in Cape Town.

In the film industry Mark brings working experience in construction, special effects and set design to the table. He is often called upon to produce ‘build ready’ and/or ‘virtual reality ready’ models from design concepts. He is highly proficient in working with ‘Sketchup’ for 3D visualisation, conception and honing the design details; and with ‘Fusion 360’ for complex ‘in motion’ design details, for construction drawings and for CNC machining of components.

Mark is an open minded and respectful team player. As a leader he is quick to realise individuals strengths, is happy to share his knowledge and likes to make people responsible, to challenge and bring out the best of an individual.

CAREER SUMMARYMark was awarded a scholarship to study a BSc in Electrical Engineering (University of Witwatersrand) and then worked in Mining (for Anglo American), a couple of years as a Software Design Engineer (for Teklogic) and later in Research (for the Energy Development Research Centre, University of Cape Town). It was a troubled time in South Africa and Mark was restless in his early career: He studied arts in his free time, travelled widely in Southern Africa and made artworks prolifically and with experimental freedom.

In 1994 he began working with a Dutch theatre group called Dogtroep and later with Warner & Consorten, where he found vision for site specific work in theatre and Architecture. To express this work Mark founded the Odd Enjinears, deliberately misspelling the word Engineer because we were not conventional Engineers.

Initially Odd Enjinears made site specific productions with curious technology and invented musical instruments; making highly successful shows in for example a BlackSmith Forge (Cape Town), an old power station (Grahamstown), or, in a dungeon in a castle (Cape Town). For each project they would put together an inventive team, responding to the particular opportunities of each location and approaching technology with the creative instincts of artists. They reinvented theatre using no words with a unique blend of sculpture, music, machines and performance; approaching technology with the creative instincts of artists. Odd projects afforded the team the opportunity to experiment and try-out ideas. Odd Enjinears went on to play all the major arts festivals in South Africa, and a tour of Dutch festivals in 2000/2001.

Under the name Odd Enjinears, Mark went on to win a variety of competitions and commissions for a range of public and private works; music machines, water driven ‘machines’ and children’s play structures. He worked with advertising agencies to realise unique, once-off displays with a ‘wow factor’ being the primary goal for a particular clients vision; he contributed the ‘wow factor’ to the Cape Town display for the national flower show for five years running and he worked with shopping centres, making sculptural ‘machines’ for specific events or for permanent public attractions. What most of these works have in common is that they are in motion. As an individual, Mark has also contributed paintings and sculpture works to a number of galleries and curated group shows.

As a socially conscious person Mark has worked with Cascoland and the Theatre Embassy (Netherlands based groups) in South Africa and Peru on what is called “social intervention projects”: These are projects with a stated social intention; those people who walk on a dangerous highway (in Durban) need to be made aware of alternatives; or, those two conflicting groups of people (in Tacna, Peru) need an opportunity to interact, to give a couple of examples.

More recently Mark won the tender for the Khayelitsha Hospital Artworks project; a unique and pioneering project in which all Artworks adorning the hospital were produced through workshops with local artists and people involved in the construction of the hospital. Following this, he took on the job of director of Greatmore Studios Trust, working with a staff, artists and arts outreach programs to further the careers of South African artists.

In 2017 Mark returned to his own work with determined relief. He currently juxtaposes periods of intense focus on art making with working in the film industry with experience in set construction, special effects, set design and specialist fabrication.

Please view many works mentioned in this document on www.markodonovan.co.za

I have not painted since those early restless years when I rebelled against social norms and lived remotely. There were times when I would make a painting or a painted life size figure just to destroy it (and put to rest something which had been eating at me). Back then I loved painting: My works were passionate and expressionistic. I approached my work ritualistically and believed in its deeper purpose. I learned to paint by moonlight because the choice of colour is overridden by its tone. It was during this highly experimental phase that I started painting on textiles applied to board, a practice I have pursued to date with astounding results.

Finally now I am getting back into my own work, developing ideas in painting and sculpture and looking to really hone my skills in areas of focus. I set out by looking at works of masters which speak to me. I look around in my daily life and respond to certain things: A piece of ‘vacant land’ where district six had been, a graveyard, the neglect, the abandonment. I trust my instinct and discover levels of meaning as the work progresses.

I started where I left off those many years ago; drawn to ritual, drawn to conscious intent, drawn to layering: I start with African wax print on board – bright patterned colour – and then work with pigments sourced in South Africa from the earth. I seldom ‘paint’. I PUT the mark down….. in sharp focus. I want my work to be approached from a distance, in which the whole is seen to be exquisite, and then the closer one gets, the more crass and messy or brutal and neglectful the detail is seen to be. All landscape has such history. Each plot of ‘vacant land’, a history, a present and a future potential.

My work is undoubtedly African. 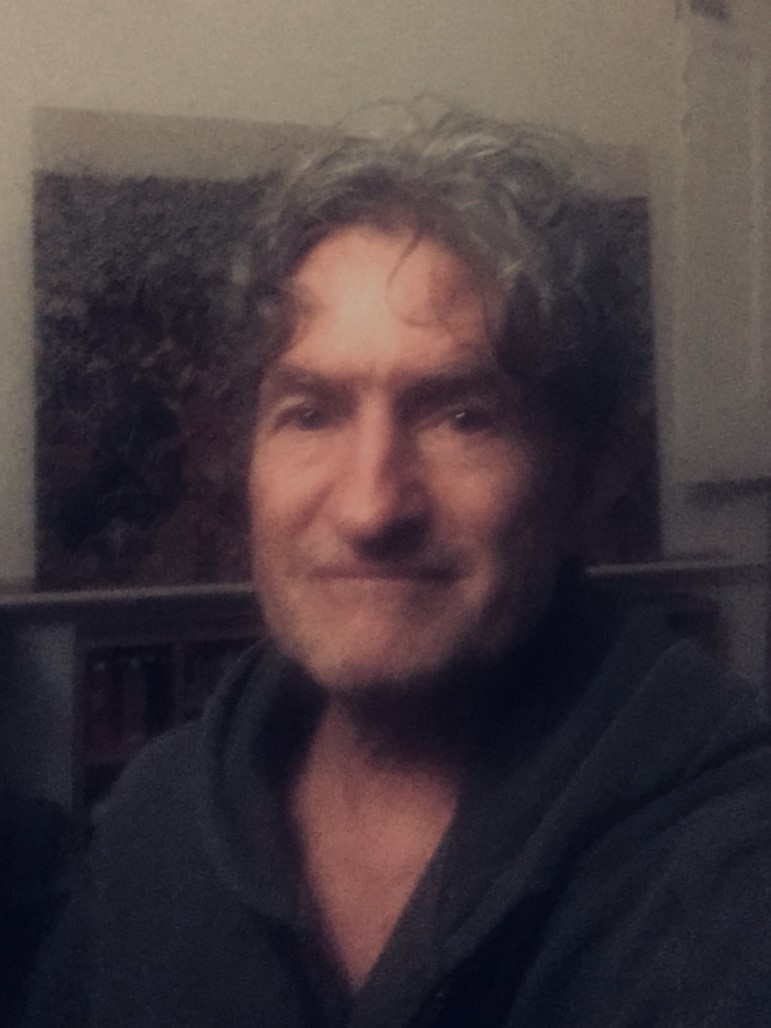 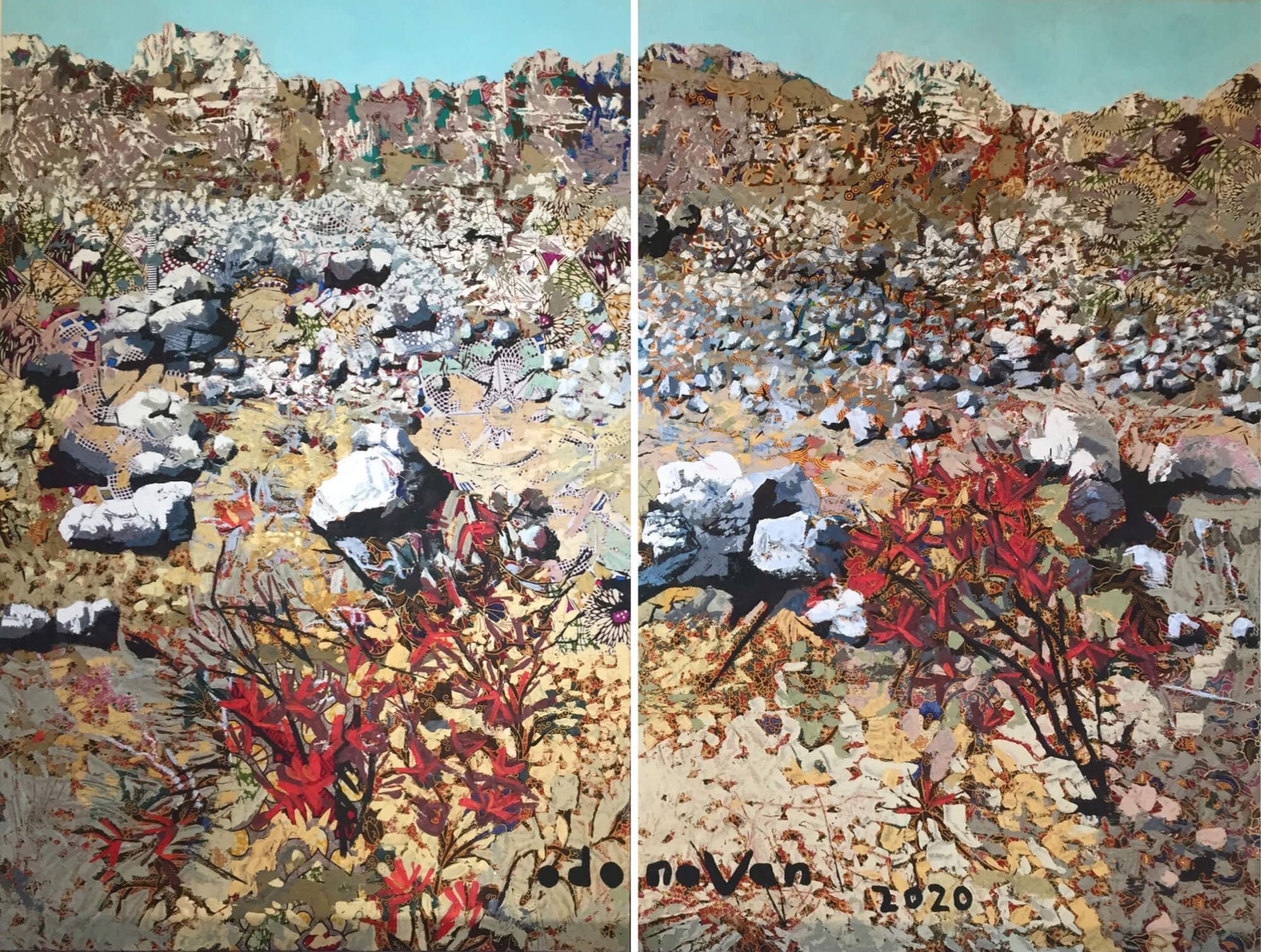 Rooi Els 1 – The surface of things

Rooi Els 2 – The surface of things

View from the Highway