Bambolwami Sibiya was born in KwaThema, Springs, near Johannesburg.  During his high school years, he trained at Mbira School of Music and Art under the late Paul Madi Phala. When he completed his schooling, he attended Benoni Technical College and studied graphic design and art, and completed a Design certificate at Benoni Technical College. In 2005 and with a friend opened a small graphic design business where they were able to purchase a computer to enable them to design logos and pamphlets for local entrepreneurs.

His teacher, Paul Madi Phala, recommended that he should apply to Artist Proof Studio (APS) to attend printmaking classes in the Saturday program while continuing to support himself. His determination to succeed and his natural talent convinced Lucas Ngweng, a teacher at APS, to recommend him as a full-time student. Sibiya, at this time, explains that he caught “the printmaking bug”. In 2008 he was offered a full bursary to enter his second year as a full-time student.

His workplace internship during his third and fourth year as the assistant gallery curator for the APS Gallery exposed him to the handling of professional artist’s work. He was fortunate to work on the large-scale linocuts of several leading artists such as William Kentridge, Diane Victor, Norman Catherine, and Colbert Mashile. The scale and power of those monumental prints profoundly moved Sibiya and he extended his own work on a larger scale as he tackled more ambitious images with added confidence.

Sibiya has fared exceptionally well in various art competitions over the years. In 2008 he was a finalist in the Ekurhuleni Art Award and in 2009 and 2010 he was a semi-finalist in the Thami Mnyele Award, receiving a Merit Award. In 2011 he was in the top ten nominees for this award. In 2012 he was a finalist in the Absa L’Atelier awards and the winner of the prestigious Gerard Sekoto Award, which provided him with a three-month residency at the Cité Internationale des Arts in Paris in 2013. In 2012 he has recognized the Arts and Culture Trust (ACT) awards for the most promising visual artist 2012, an award given to him by the Johannesburg art community.

Bambo Sibiya’s work has rapidly found an active market. His work is being bought by private collectors and public curators. His skill and virtuosity and deeply felt empathy and engagement with community challenges, place this young artist on the threshold of a bright future. His supporters feel that an investment in this young artist’s career is an investment in the talent of the best and brightest that South Africa has to offer.

Freedom did not just come it was invited, Everard Read Circa Johannesburg 2018

Thami Mnyele Award exhibition at the Art Centre, Ekurhuleni in 2010

Sampson Studio exhibition at Illovo in 2011

Sibiya is articulate in describing his own journey of discovery and fulfillment. While he was always a strong draftsman, in his second year at APS his work started showing social content and engagement with his community. As a student, he was encouraged to develop his own voice through cultural and art-historical research as well as by participating in social advocacy programs. Sibiya found himself drawn to the social realists and became interested in Hogarth’s social allegories, Goya’s “Disasters of War” as well as Diane Victor’s “Disasters of Peace”. Encouraged both by his patron Clive H. Viveiros, and his teachers, he was urged to find subjects that were more familiar and hopeful in their outlook. Thereafter he began to etch poignant compositions based on what he saw in his local community. His figures, drawn from photographs he had taken, show how families survive in poverty.

His subsequent themes, based loosely on the experience of his mother, led to a very accomplished series concerning single mothers as heads of their households. Bambo discovered that he too, was in fact the head of a household of women when his father left the family. He grew up in a culture of alcoholism, amidst the breakdown of his own family structure. Many of the men in his community spent their time and income drinking in shebeens. Sibiya in describing this experience expressed his determination not to become like his father who had abandoned his family.

Many of Sibiya’s prints depict mothers as the central and most elevated figure in his compositions conveying the message that despite hardship and unemployment, women still manage to find ways to feed their families, nurture and protect their children and keep their families in relative security. In a more recent body of work, Sibiya shifted focus to the lifestyle that developed around migrant communities. His style and technique gained a steady level of sophistication. 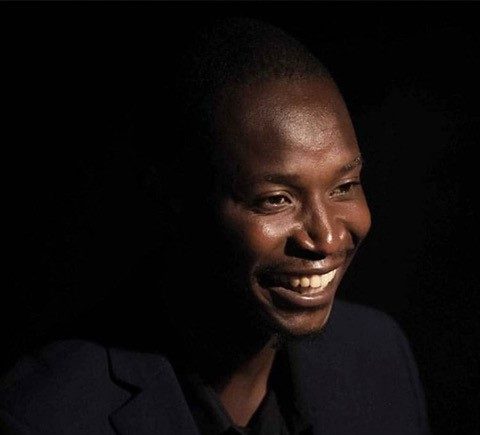 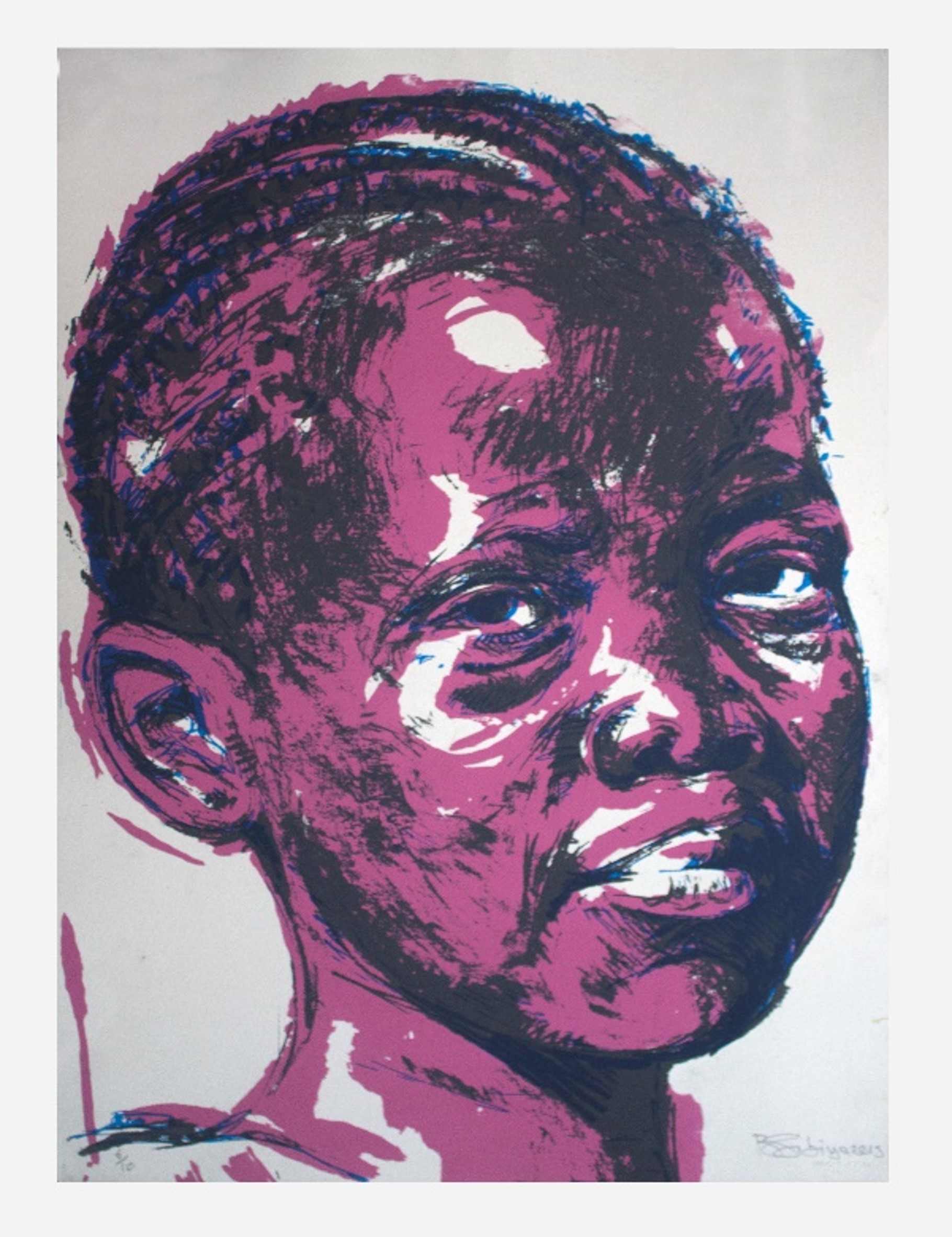 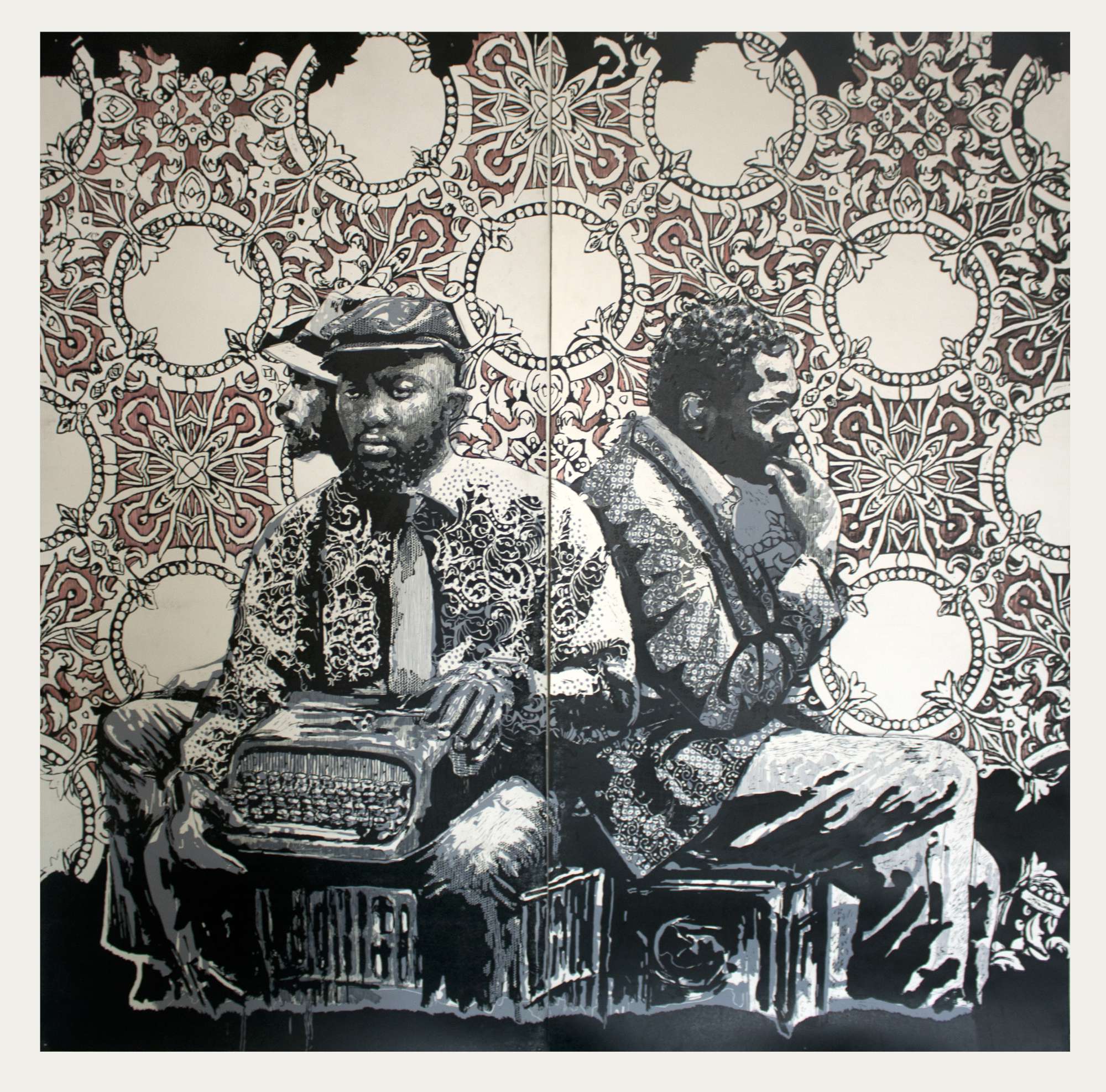 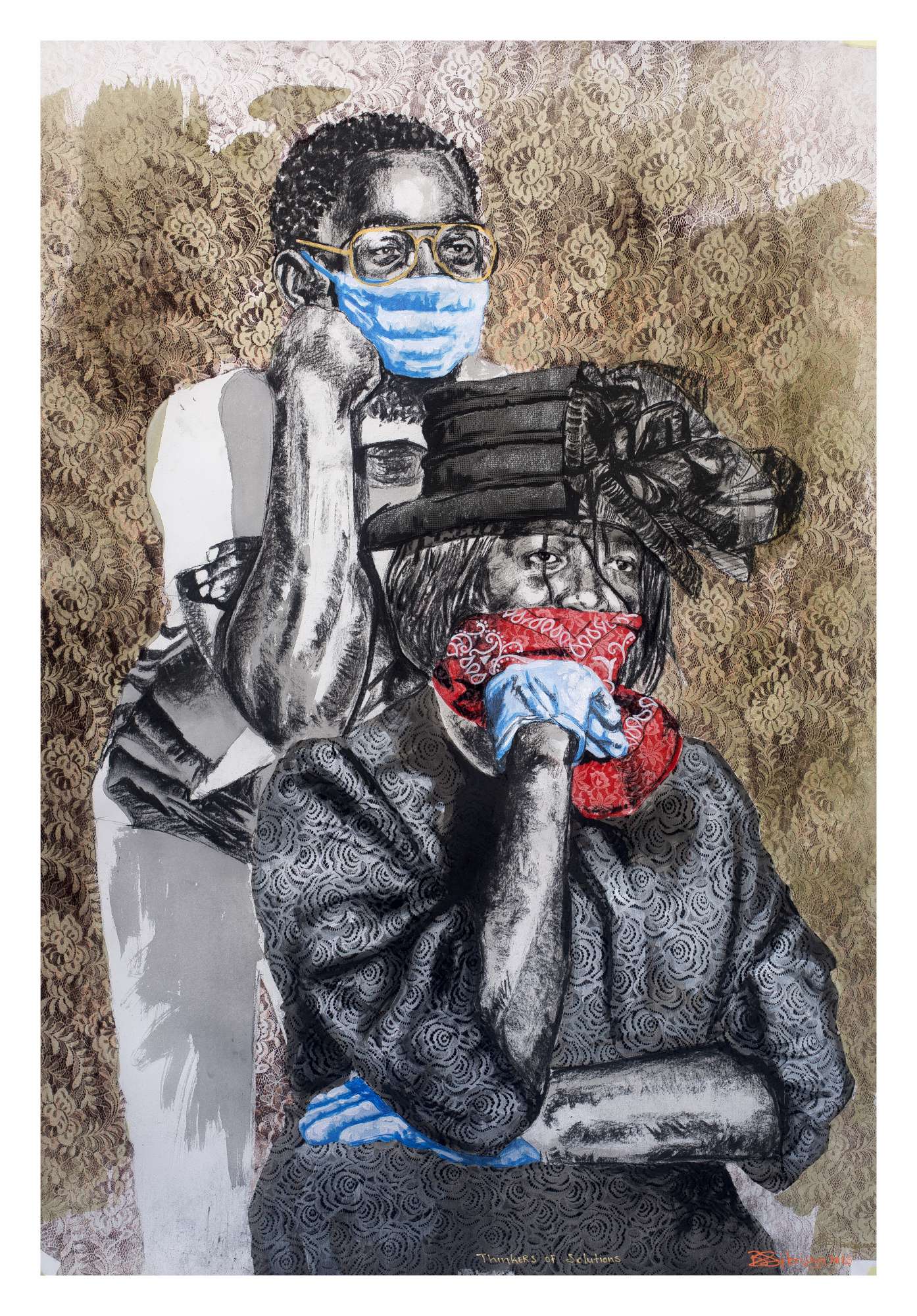 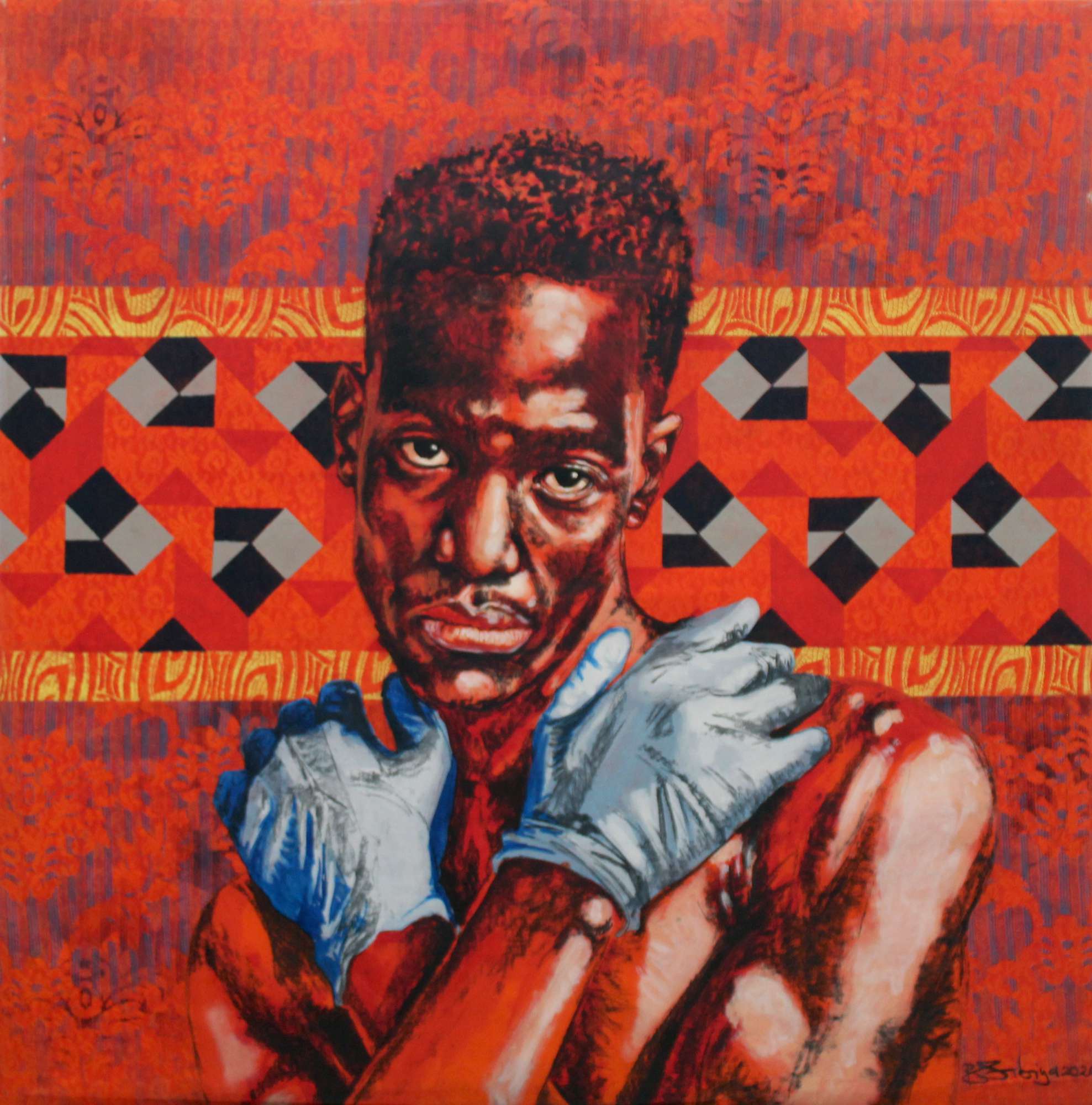 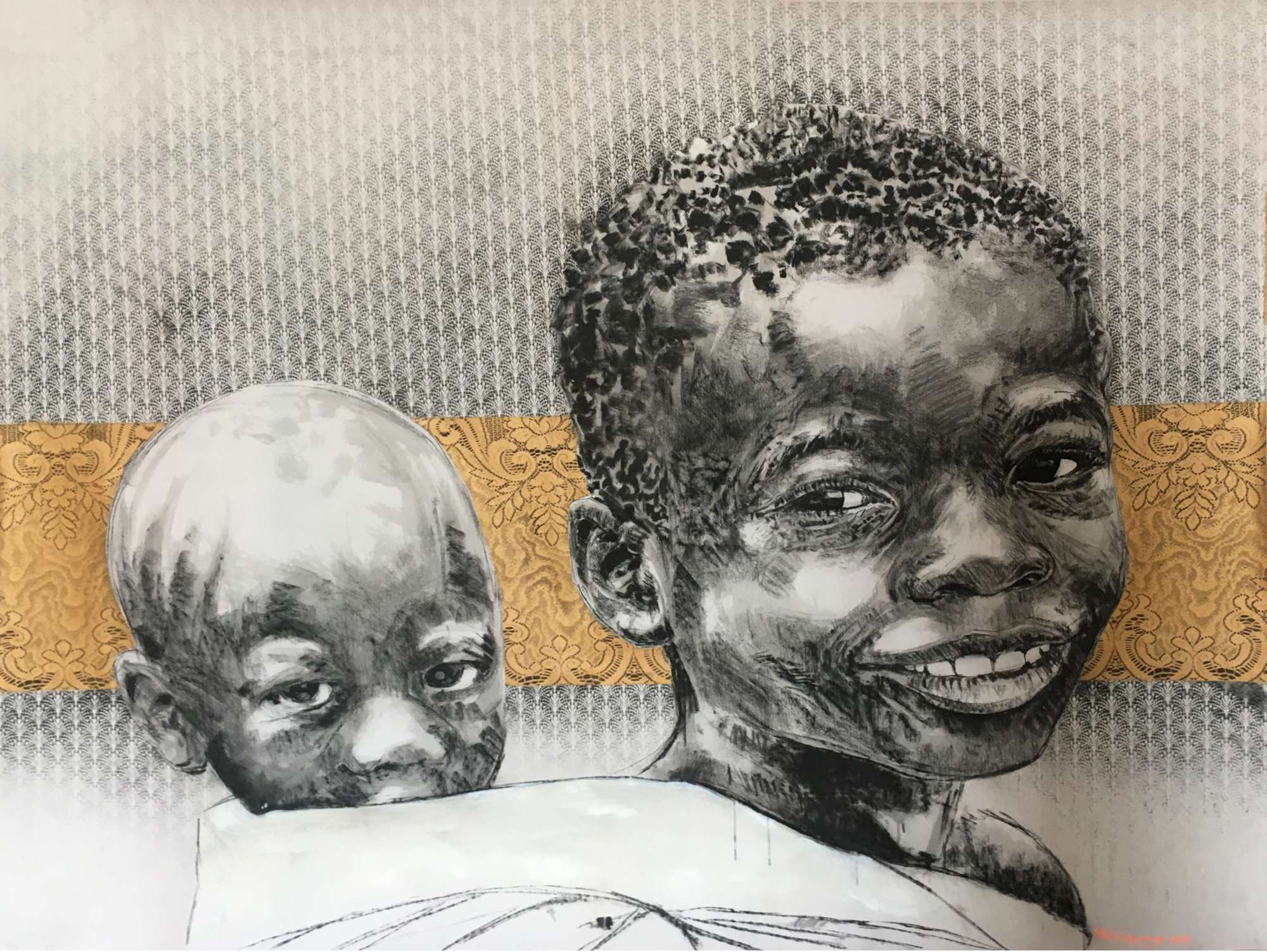 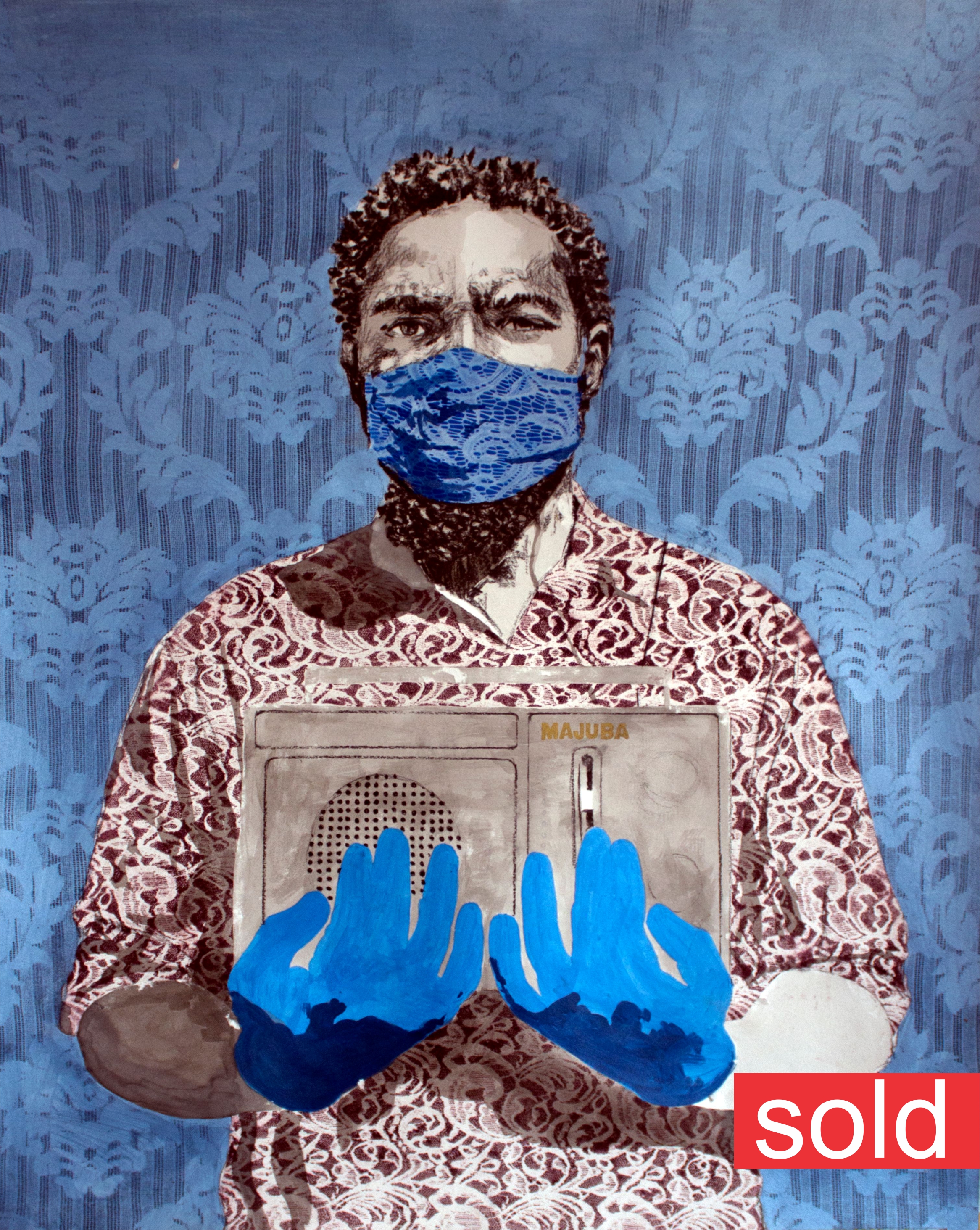